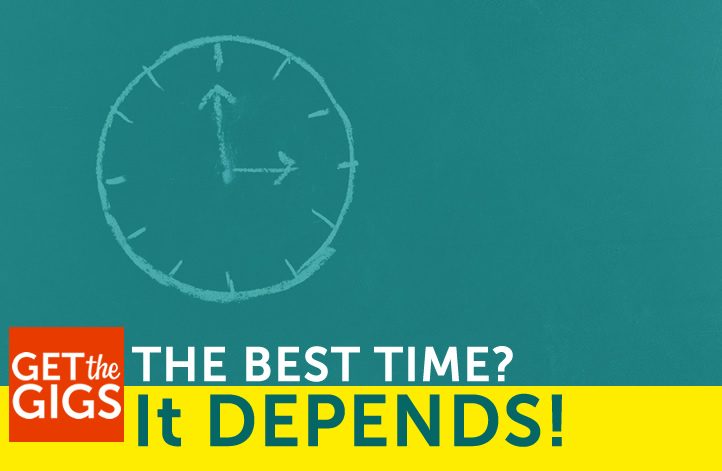 According to many, there are ABSOLUTELY to-the-minute, one second later equals failure, BESTEST OF THE BEST times to share on a social media platform!!!

I’ve had it. Enough already! To quote Popeye …

That’s all I can stands, I can’t stands no more.

What’s got me on this tear?

The publish and promotion of social media articles and infographics “sharing” the best time to post for maximum reach, reaction, engagement and more.

There are SOOOOOO many reasons these articles and infographics grind my gears, but I don’t really have the time to write a novel and don’t think you’re game to read tens of thousands of words on the subject. So, I’m sharing just a few!

So, let’s think about this. Let’s say we’re told that 9:23 AM is the BEST time to post to Twitter (I’m just making this up, of course).

But is that 9:23 AM Eastern? Central? Mountain? Pacific? And that’s only spanning the time zones that cover the continental United States. What about daylight-saving time?

You get my drift, right? I’ve never seen an article or infographic detail the differences in “best time” social media sharing based on audiences that span multiple time zones. Most people running a digital business find themselves with a following that spans countries, if not the globe.

9:23 AM for me, in my EST space, is 6:23 AM for my family and friends AND peers in California (PST). While many of them are early risers like me, there’s no guarantee that they’re sitting ready and waiting to see what I’ve posted as the sun rises on their day.

Then, and this is what I found ludicrous and laughable, the author turned his back on those “best” times and touted a smart posting window that stretched from 9 AM to 7 PM. What?

The 'best time' to post to social media channels spans ten hours? Well thanks for the info, Captain Obvious.Click To Tweet

A ten hour window is pretty wide. You wouldn’t accept that from a service provider. Imagine if you were getting cable TV installed and you were told the installer would arrive between 9 AM and 7 PM. No bueno!

It’s not one bit different when you’re lead to believe you’re going to get the golden goose and finally know the absolute bestest single time to post a scintillating social share for your audience. Even less bueno!

The lifespan of a single social media post depends on so many factors. The platform. The size of your audience. The speed and breadth of that audience’s feeds. The time of day your audience is active. The popularity of any hashtags used. The addition of a visual prompt. The value or vibe of the post itself.

And, digging a little deeper, you can’t easily compare the lifespan of one tweet, post or share with another. Did they have the same hashtag? A photo? Was it a conversation starter like a question or a link out to your content?

The Scariest, But Most Honest Answer To Social Media Timing Questions …

That response might sound wishy-washy and passive aggressive in other applications, but when it comes to the “best” time to share on social media in order to “best” impact reach and engagement, it is the BEST answer.

It’s all about putting in the time and effort to craft the kinds of social media shares and posts that suit the needs of those you’re trying to reach. Then you gotta monitor your most important metrics to see what works and what doesn’t. And you’ve gotta do that over and over and over again.

Social media marketing isn’t a set it and forget it kind of endeavor. The practice, the strategies, the tactics evolve over time. As do the “best” times to reach your audience.

I can get on board with a one-size-fits-all scarf. It makes sense. But there’s nothing sensible about a one-size (or time) fits-all solution for social media marketing.

That Stock Photo? It Doesn’t Have To Suck!

Better Branding: Play Yourself In The Lead Role!
Scroll to top