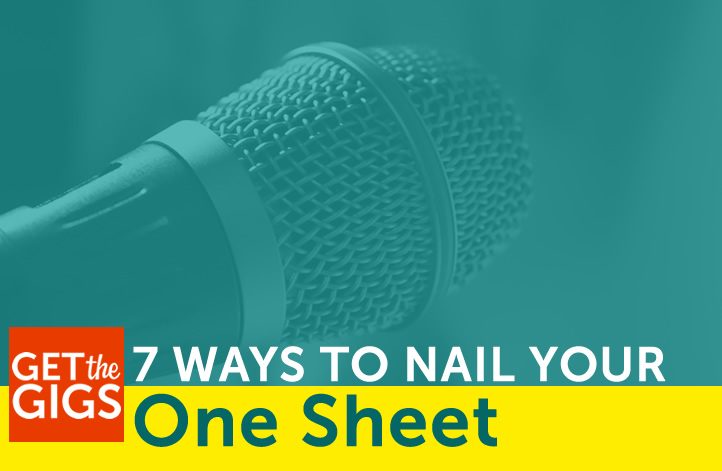 Crafted and distributed well, a speaker one sheet is a crucial item in the arsenal of any professional speaker. Think of your one sheet as the executive summary for your speaker packet or PR kit.

It’s a simple enough document. It shares what you do,  the benefits of booking you and, if you’re booked, exactly how the engagement will go down. I’m sharing my seven tips for nailing that one sheet and landing that great speaking gig. Follow these guidelines, and I’d be willing to bet you’ll tack on at least one or two extra speaking engagements in the coming year.

Setting Up A Stellar One Sheet

1. Resist the urge to pack it to the gills with information.

White space is kind of a big deal. You need it to call attention to items of emphasis, rather than overwhelming the viewer.

There’s only so much space available on an 8.5 x 11 page, so you’re not going to be able to tell your life story. Instead, you’ll need to make some hard decisions about what to include.

Make a hierarchy of your content in order of importance. Save the stuff at the bottom for your expanded speaker packet or your website.

2. Definitely include a professional photo.

Seriously, I don’t want to catch any of you trying to get away with a cell phone pic.

Hire a pro to take that photo and make sure you’re represented like a professional, then use your favorite shot conspicuously on your one sheet.

3. Position yourself as THE sought-after authority.

You’ve been featured on NBC, CNN, the Wall Street Journal and the Huffington Post? That’s impressive! Include a small section resembling “as seen on,” then include some high-res logos to really showcase where you’ve already been featured.

Not quite at that level yet? That’s okay. Instead, opt for a glowing testimonial from someone (preferably in upper-management) from the most well-known organization that had you speak.

4. Let people know the benefits of working with you.

Did a company report increased profits or productivity right after working with you? Play it up!

People don’t act without first asking “what’s in it for me?”

Remember, this thing is going to wind up in the hands of people in a position to hire you. When that happens, they needed to be motivated to make the call.

5. Spell out how working with you is going to play out.

You have to strike the right balance between detail and brevity here. Let people know what topics you’re willing to cover. You need to make sure they get the picture, and you must do so succinctly.

6. Include a call to action.

I’m a big believer in putting calls-to-action on damn near everything.

You have an ideal outcome in mind, so ask for it to happen!

Be explicit and ask for the viewer to call you or email you to book you for their next corporate function. And, this is kind of a no-brainer, but make sure your one sheet has your contact info on it.

Ideally, you would have a professional designer take a crack at this but sometimes that’s not necessarily feasible. At the very least, put it in front of someone who might not know what you do all that well and get their honest opinion. If they can recite back to you accurately what you do and who you serve AND give you a favorable first impression, then you’re off to a pretty good start.

Speaker one sheets are one of my favorite documents to design. There’s so much opportunity to reflect the speaker’s personality and really enforce a personal brand.

If you’re stuck on where to go with your one sheet, let’s have a conversation. Reach out via phone or email. I’d love to hear from you.

WordPress For Speakers: A Perfect Fit!

Why I Design Websites For Speakers
Scroll to top